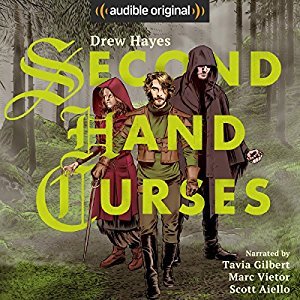 Second Hand Curses is a 2017 fantasy novel by Drew Hayes, set in a world of Fairy Tales.
Advertisement:

The novel focuses on a trio of scoundrels, calling themselves the Bastard Champions. The Champions travel the land, helping out those, who come to them, provided the pay is good. Their specialty is dealing with various kinds of magical creatures, from witches to fairies. Jack is a seemingly-unkillable Perpetual Smiler, whose skill with a dagger is only matched by his Silver Tongue and lust for gold. Marie may look like fragile young woman but is constantly struggling to keep the beast within her hidden. Frank is always wearing a hood, hiding hideous scars all over his body, and is the smartest the of three. Their partnership is based on mutual loyalty and trust.