Literature / The Sea of Trolls 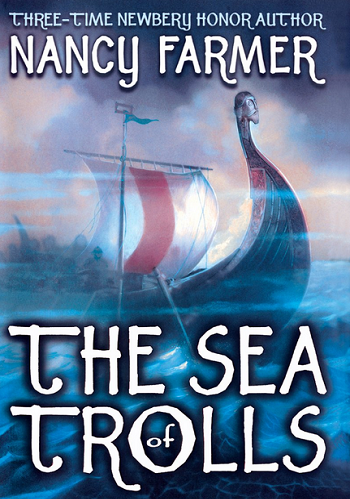 A novel by author Nancy Farmer combining historical fiction with fantasy about a Bard's apprentice living in a village on the coast of England in The Low Middle Ages. Ten chapters in, said village is invaded by Vikings, who capture him as a slave. He survives captivity by demonstrating his recently-developed magical bard powers and making himself useful to the Vikings.
Advertisement:

In the Norse town where he ends up, events transpire which lead him to accompanying several warriors on a quest into Jotunheim, the land of the Trolls.

Nancy Farmer later wrote two sequels, Land of the Silver Apples and The Islands of the Blessed.

Despite the title, no apparent connection to 4chan and Something Awful.

The Sea of Trolls and its sequels provide examples of the following tropes: