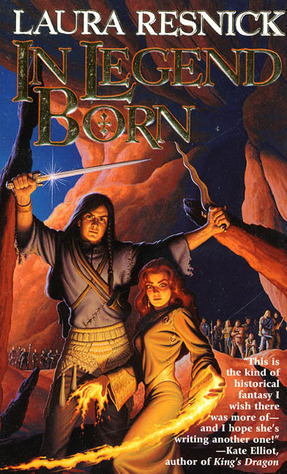 The original cover of the first book.
A trilogy of fantasy novels by Laura Resnick, also known as The Chronicles of Sirkara (another name for the series' titular land). It is set on the island of Sileria, a land which has long been ruled by foreign invaders. After many centuries, the struggle for freedom at long last begins under a savior called the Firebringer. Yet the Silerians are almost as dangerous to each other as their foreign oppressors...
Advertisement:

The first book, In Legend Born, was released in 1998. The second, In Fire Forged, followed in 2003, split into two parts: The White Dragon and The Destroyer Goddess. Another book in the same world, called Arena, was promised initially, but fell through as the result of a contract dispute being Resnick and the publisher. However, she released a short story which is set in the books' universe and featuring one character from the books in the collection Blackguards: Tales of Assassins, Mercenaries, and Rogues, entitled "Friendship".