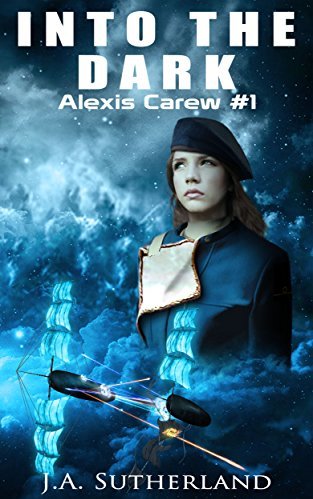 "The very worst thing about being a woman in this Navy is that the insults are so very limited. You men get called all the imaginative ones."
Alexis Carew

is a series of Space Opera novels by J.A. Sutherland.
Advertisement:

The only living descendant of a landowner on the planet Dalthus IV on the extreme fringe of the New London Kingdom, Alexis Carew grew up raised by her doting grandfather Denholm and his farmhands. Unfortunately women's rights took a giant leap backward during Dalthus' colonization and inheritance operates on agnatic primogeniture, so she must marry if she's to keep the family's considerable estate in the family. So, what's a tomboy to do when all the boys of her age and class are entitled sexist idiots?

Appointed a midshipman by the kindly Captain Grantham aboard Her Majesty's Sloop Merlin while her grandfather lobbies to have the laws changed, Alexis, now the only female officer in the Fringe Fleet, battles pirates and sexist shipmates and superiors alike, as war brews with the neighboring Republic of Hanover. It's basically Horatio Hornblower IN SPACE! if Horatio was, instead, Horatia. But not if Horatio was Honor. That's a different story, altogether.

The series contains the following works: