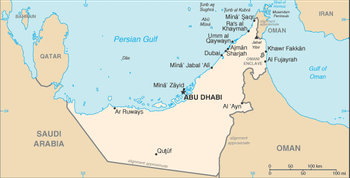 The United Arab Emirates (Arabic: دولة الإمارات العربية المتحدة‎ Dawlat al-ʾImārāt al-ʿArabiyyah al-Muttaḥidah) is a Western Asian federation of seven emirates on the Persian Gulf. "Emir" is Arabic for "prince", so these emirates are basically principalities. The only parallel in the modern world of a federation of monarchies is Malaysia (although for historical reasons not every state in Malaysia is headed by a monarch), but the Malaysian sultans are ceremonial, whereas the Emirati emirs still hold a lot of powers. It is not a democracy, but slight moves have been made in that direction.
Advertisement:

From 1820 to 1971, it was a British colony called the Trucial States. Up to 1947, it was an administrative division of The Raj and used rupees minted in India as its currency until as late as 1966.

A country with twice as many men as women due to the influx of guest workers, it is a major oil producing state and acquiring further wealth all the time. It has the 5th highest GDP per capita and the 3th highest HDI in Asia.

The country has a population of 9.3 million. However, Emirati nationals only account for 13% of them, i.e. 1.2 million. The rest is made up by foreign expatriates, chiefly economic migrants from the Indian subcontinent; taken together, they constitute more than a half of the population and outnumber Emiratis by four to one. Other expatriate communities came from Southeast Asia, other Arab countries, and Africa. This migrant-outnumbering-citizen situation happens in other Persian Gulf countries too, but nowhere is this as pronounced as in the UAE.

Like other members of the Gulf Cooperation Council, citizens experience a highly luxurious life. This includes a very cushy welfare state, free healthcare, and free education up to the Doctorate level. Even the large welfare states of northern Europe seem threadbare and stingy in comparison to that provided in the UAE. Not so great is the fact that all this luxury is mostly built on the backs of the country's vast population of non-citizen guest workers, most of whom are criminally underpaid and emphatically not supported by the welfare state.

The UAE is close to the US and bought F-16s from them in 1999, and many ships of the United States Fifth Fleet are based in the UAE. It provided troops to the UN coalition in The Gulf War (1991). It used to align its foreign policy with Saudi Arabia, the most influential member of the GCC, but this seems to have changed in recent years. The UAE still maintains a relationship with Iran in spite of the GCC's boycott, as Iran is a valuable trade partner, and it also backs a different faction of the Yemeni civil war. In 2020, it became the first Gulf country to normalize relations with Israel, with trade relations set up and ambassadors expected to be exchanged soon, contrary to Saudi wishes for relations to be established after a definite solution to the Israeli-Palestinian conflict is found.note Saudi Arabia's reservations for relations with Israel have been suggested to be more of a PR matter; being the spiritual center of the Islamic world, it normalizing relations with Israel would be seen as abandoning the Palestinian cause entirely and probably cause some kind of political firestorm (and indeed, when the UAE announced the Israeli peace treaty, threats of boycott against the UAE briefly abounded). In any case, it is basically an open secret that the Saudi and Israeli higher-ups have been collaborating in recent years in the face of Iran.

Camel racing is popular and the place is attracting motorsport too. The country is a popular tourist destination, with tens of millions of people visiting the country annually. This has resulted in a bit of a culture clash between the covered-up, teetotal locals and the scantily-clad, beer-drinking tourists. Homosexuality and adultery are against the law.

The UAE is divided into seven emirates. Except for Abu Dhabi and Umm al-Quwain, all of the emirates' territories are discontinuous, with exclaves and enclaves dotting the northeastern region. This dates back to the tribal politics of age old, when clans had to race against time and each other to grab as many fertile grazing areas as they could. Sharjah is the worst about this, but the others are not much better. Part of the reason the emirates decided to merge in 1971 was to prevent the (potentially catastrophic) result of this agreement.

The UAE and its residents in fiction

. One episode featured a musical number about the city.