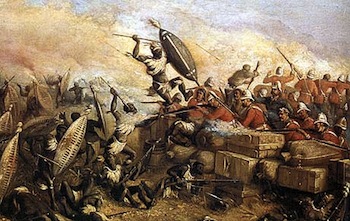 The Battle of Rorke's Drift
"War against Zulus. Cause: The Zulus. Zulus exterminated. Peace with Zulus."
— W. C. Sellar & R. J. Yeatman, 1066 and All That
Advertisement:

The Anglo-Zulu War (1879) was a series of conflicts fought between the British Empire and the Zulu Empire all between January and July 1879. The war was instigated due to tensions between the Zulu leader Cetshwayo, and the Boers in the Transvaal region. The British chose to intervene due to a pre-existing desire to war against the Zulu because of land disputes. In 1879 a British force invaded Zululand aiming to capture the capital of Ulundi.

In response a Zulu force of 40,000, armed mostly with assegais, was mobilized against the British expeditionary force of 15,000 (split up into three 5,000 man columns), with 15,000 Zulus engaging approximately 1,700 British and Native soldiers (the majority of the column had gone off with Lord Chelmsford to establish the next campsite), while a further 4000/5000 cut off the retreat and acted as reserve. Of the British force, 55 men survived. Underestimating Zulu numbers and capabilities met with bad leadership as the British lost the initial Battle of Isandlwana. Immediately after this, 4,500 (estimates vary) Zulus who had made up the reserve at Isandlwana went and attacked the British hospital post at Rorke's Drift, only to be beaten off by the 139-strong garrison in a fight which lasted twelve hours, resulting in eleven Victoria Crosses being awarded, a record for a single action unsurpassed to this date.

The British would win a decisive conflict during Siege of Eshowe, and a major contingent of their forces decided to make a Tactical Withdrawal following news of the defeat at Isandlwana. This left only a single small British force in Zululand, unable to advance alone.

With the British invasion force crippled, Cetshwayo was left in an odd position. He hadn't anticipated such a decisive victory over the invaders, albeit at distressingly heavy losses (he said, on receiving news of the victory, "An assegai has been thrust into the belly of my nation"), and hadn't planned to follow them into neighbouring Natal. Indeed, he wanted peace and had specifically ordered his men not to invade Natal. With the exception of those at Rorke's Drift, which is considered a national embarrassment by the Zulus - not for the loss, but for the fact that they disobeyed their King's orders - they obeyed.

So the Zulus remained in their own country as the British retreated and regrouped. The British eventually launched a second invasion but suffered a debilitating defeat at the Battle of Intombe, where a supply convoy was ransacked by the Zulu and only 40 British managed to escape. It should be noted however that, Like Isandlwana, a much smaller British force was ambushed by a large Zulu one.

The British would face defeat again at the Battle of Hlobane. Shortly after, a scouting mission went disastrously wrong when a scout group, including the exiled heir to the French throne, the Prince Imperial, Eugene Napoleon, who had volunteered for service (he was, it should be noted, a fully trained officer cadet), was jumped by a party of Zulus. They finally met with some success in winning the three subsequent battles: the Battle of Kambula, the Battle of Gingindlovu and the Battle of Eshowe.

Finally, however, they found some success in their advances, the British found themselves in more or less the same position they had been in January. Quickly moving forward in an attack on the capital, Cetshwayo attempted to establish a treaty but was refused peace talks by the British, who were in a mood to make a point before any of their other colonies get inspired to attempt uprisings of their own against them. The resulting Battle of Ulundi, in the Valley of the Kings, the British made better tactical arrangements (they essentially set up in a gigantic square, sidled across the plain, found a suitable place to stop, then essentially waited for the Zulus to attack) and more suitable weapons like Gatling Guns, was the deathblow of the Zulu Empire. The battle lasted for approximately thirty minutes. Then the British unleashed their cavalry. Predictably, the cavalry had a field day.

In the aftermath of the British victory at the Zulu capital, the remnant of the Zulu army dispersed and Cetshwayo went into hiding, though he was later captured and deposed. Zululand was then divided into 13 territories by the British. After imprisonment in the Cape, Cetshwayo visited England. Famed for his quiet nobility, he impressed Queen Victoria (not an easy thing to do) and became, peculiarly, something of a darling to the British public, who got the dim impression that he might just have been the victim. As a result, he was awarded the monarchy of one of the 13 statelets. He would die in 1884, probably poisoned, after being attacked, during the resulting Civil War.

Today what was Zululand is a portion of South Africa, KwaZulu-Natal, one of South Africa's nine provinces. In North America today it is probably best known as the place where Mike Rowe got attacked by a monkey.