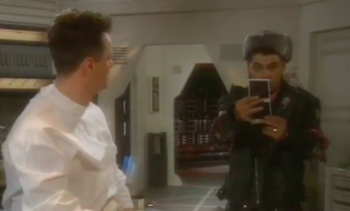 No vacuum cleaner should give a human being a double polaroid!
When Red Dwarf discovers a strange, alien-looking vessel in its wanderings, naturally the boys can't resist boarding it and taking a look. They come to regret their decision when they unwisely play with the experimental genetic alteration engine housed aboard the derelict.