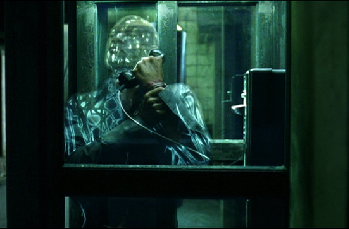 Perfect for getting in touch with someone long-distance.
Advertisement:

When a character needs to travel to where another person is calling him on the telephone from, he will just simply get there lickety-split by entering the receiver of the phone he's talking on, then coming out from the other receiver that the other character is calling from. Often played for Rule of Funny.

A common variation in cartoons is where characters making a Split-Screen Phone Call simply walk over to the other side of the screen.

Compare Reaching Between the Lines and Television Portal.

A character who can Ride the Lightning may use telephone wires as a conductor. Not to be confused with Electric Slide or instances of a certain blue police phone box vanishing into thin air.