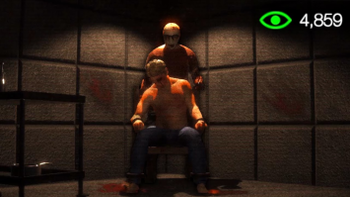 Major Isamu: (in torture chamber) The general is watching... If you sign this paper, admitting you lied about us, you'll be freed. If you're foolish and refuse, then we will persuade....
General Tara: (in private office, smirking) I hope they refuse....
— The Phantom
Advertisement:

Not all torturers consider their activity a private, intimate thing. Some of them will televise their deed, either for their personal consumption via CCTV or for a public to watch. The equipment used can run the gamut from state-of-the-art camera systems operated by legions of henchmen in a torture dungeon to a Handycam and a tripod, for the more cost-conscious psycho.

Ideally, the villain will be somewhere far more comfortable than the victim, and usually indulging in some hedonistic relaxing ritual, such as sipping an expensive bordeaux or cognac, smoking a fine cigar or cigarette (in a holder for added decadence), while simultaneously giving orders by intercom to the less-refined minions who are paid to do their dirty work. These villains usually also use this same system to subtly (or not so subtly) verbally torment the victim.

Whatever they do, the effect is demoralizing for the prisoner, to say the least. The message is clear: "Someone is watching you and, unlike you, that someone is enjoying themselves." Public Execution and murder.com are related tropes.