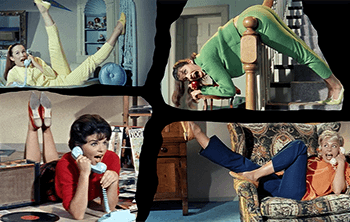 Have you heard about Hugo and Kim? Did they really get pinned?
"Mr. Telephone Man
There's something wrong with my line
When I dial my baby's number
I get a click every time"
— New Edition, "Mr. Telephone Man"
Advertisement:

A popular way to convey details about people's relationship is to have them sing about their telephone calls. One person is often singing about how much they want to call another person, or for another person to call them. The singer acquires his true love's phone number and has to muster the courage to call her; or maybe he's nervous because she promised she would call him and he's starting to have doubts. The song might convey a call's dialogue with one or two people singing about their conversation. The song could also take place in the aftermath of an attempted telephone call and describe its emotional toll.

While these types of Telephone Songs are popular, the genre also covers a wide range of situations involving telephone calls, including gossip, prank calls, and advertisements. As communication technology has evolved, so have songs about them. In many countries payphones and phone booths are disappearing, so songs that mention them are becoming rarer. Mobile phones are becoming more popular, though landline phones are still prevalent in popular culture.

In Room 70 pf Snowdin, the protagonist can dial a number and get a ditty saying it's the wrong number.

In Room 70 pf Snowdin, the protagonist can dial a number and get a ditty saying it's the wrong number.