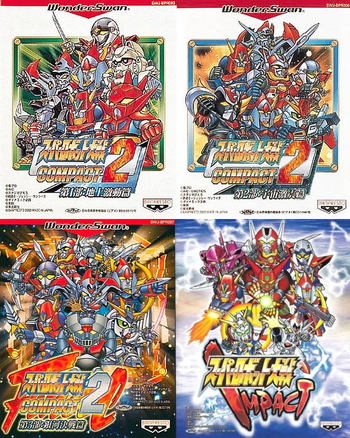 The second entry of the Wonderswan series of Super Robot Wars, the Super Robot Wars Compact 2 story was so big it had to be separated into three parts: Earth Crisis, Cosmoquake and Galaxy Showdown. The story deals with the battle between Earth's forces and the extraterrestrial Einst, who seek to restart the world they deem too corrupted. The key to Einst's success or defeat lies within two cadets in the Earth Federation's forces, serving as the game's Original Generation.

Arguably one of the more famous SRW entries, despite the obscure handheld system it started out on. It was later remade using the Super Robot Wars Alpha Gaiden engine as Super Robot Wars Impact, the series' first entry on the Sony PlayStation 2, with all three games compiled onto one disc. In addition to introducing a new original character named Einst Alfimi, Impact adds two new series to the game: Mobile Fighter G Gundam and Martian Successor Nadesico. Like the preceding Super Robot Wars Compact, Compact 2 and Impact features the "Free Route System": rather than following a linear plot, the games allow the player to choose the order to play certain scenarios in. This may affect the storyline or give the player an opportunity to unlock hidden units and/or characters.

Associated tropes for the trilogy and remake: