Series / The Man in the High Castle 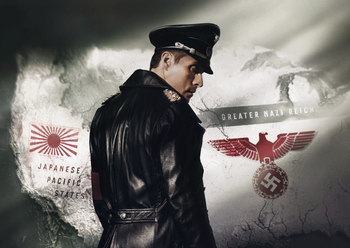 Edelweiss, edelweiss, bless my homeland forever...
“You ever think how different life could be if you could just change one thing?”
— Juliana Crain
Advertisement:

The Man in the High Castle is an Alternate History series based on the book of the same name by Philip K. Dick. It debuted in 2015 and aired four seasons via Amazon Prime.

The series begins many years after the victory of the Axis powers in the Second World War, and what was once the United States has been divided between the Japanese Empire and the Third Reich. A thin strip of neutral, lawless territory in the Rocky Mountains serves as a buffer between the two superpowers, who have been in an uneasy truce since the war's end. Juliana Crain, a woman living in the Japanese Pacific States with her fiancé Frank Frink, is given a film reel depicting an Alternate History where the Allied powers won the war. In the Greater Nazi Reich, a man named Joe Blake carries one of these mysterious film reels toward the Neutral Zone, under orders from Obergruppenführer John Smith. Meanwhile, high-ranking politicians from both empires fear for the aging Adolf Hitler's life, knowing that the death of the Fuhrer would trigger a war far more terrible than any seen before.

Man in the High Castle intro

The story of the Axis powers' victory over the US is told through a very creepy rendition of "Edelweiss".

Man in the High Castle intro

The story of the Axis powers' victory over the US is told through a very creepy rendition of "Edelweiss".