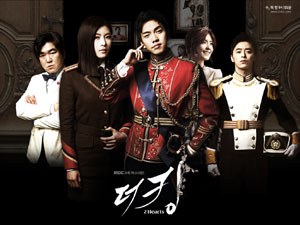 In an alternate present, South Korea is a constitutional monarchy.

Tensions are rising between North and South Korea when the South Korean King, Lee Jae Kang, announces the joint participation of both countries in the World Officer Championship (WOC). The team consists of six members: three from the North, including special forces agent Kim Hang Ah, and three from the South, including royal guard (and son of the King's secretary) Eun Shi Kyung. To gain more support for the idea, the king convinces his younger brother, Crown Prince Jae Ha, to join the team.

Hijinks and hilarity ensue as the combined team put aside their differences to train together, while Jae Ha and Hang Ah fall for each other. Fortunately for the lovebirds, King Lee Jae Kang encourages their marriage for political gains.

However, a mysterious and powerful organization called Club M is not as approving. Their mad leader Kim Bong Goo holds a grudge against the South Korean royal family and is willing to do whatever it takes to destroy the fragile relations between the two Koreas.