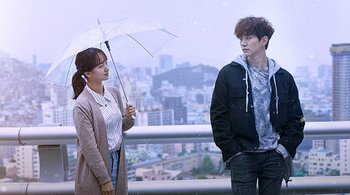 Mistakes in construction led to the collapse of S Mall, leaving 48 people dead and many people injured. Lee Kang Doo, who dreamt of being a soccer player, broke his leg, while his father died. Ha Moon Soo’s sister died, leaving her in guilt as she was the one who survived.

Ten years passed, and Moon Soo works by making architectural models, while Kang Doo makes a living by doing anything that makes him earn money. When Moon Soo ends up working on Bio Town, a project that uses S Mall’s land, she meets Kang Doo, who ended up working as the construction site’s security guard.

Will the two of them be able to overcome the trauma and pain that they feel as they work on a place which reminds them of the tragic event that changed their lives?

Just Between Lovers (Korean: 그냥 사랑하는 사이, also known as Rain or Shine) is a Korean drama which started airing in December 2017. It’s notable for being the first lead roles of [[Music/{Junho}} Junho]] and Won Jin Ah, who play the main characters Lee Kang Doo and Ha Moon Soo, respectively. The series is notable for touching sensitive topics such as the trauma experienced by victims of accidents, the effects of accidents on said victims and the people around them, divorce and messy relationships, and the unequal treatment of disabled and "normal" people.