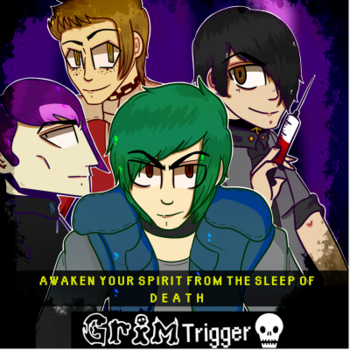 is a webcomic/point-and-click game hybrid about a resistance movement in an alternate universe. The series is made in Adobe Flash and has interactive elements as well as music and animations.
Advertisement:

The series follows 14-year old protagonist Tage Dormon as he tries to figure out the mysteries surrounding the Death armor sets. Meanwhile, a deranged, self-proclaimed emperor is convinced that he is the Grim Reaper, and is forcefully converting notable figures to his cause.

Grim Trigger is character driven, and is inspired by religion, history, and ancient politics.