Series / My Girlfriend Is a Nine-Tailed Fox 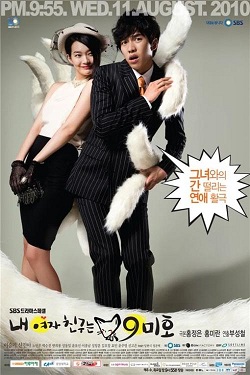 My Girlfriend Is a Nine-Tailed Fox is a 2010 Korean Drama written by The Hong Sisters about, well, a guy whose girlfriend is a nine-tailed fox.

Dae Woong is a rather irresponsible film school student who basically lives by mooching off his rich grandfather. After being tricked into freeing the Gumiho [nine-tailed fox] from a painting where she was bound for 500 years, Dae Woong falls down a cliff in a panic and mortally injures himself. The Gumiho saves his life by giving him her fox's bead, and so now, Dae Woong is stuck doing everything she asks or he will die from having the bead removed.

Of course, this doesn't stop him from trying to find ways to get rid of the fox ("Mi Ho"). Too bad she's fallen in love with him and won't go away.

Not to be confused with the 2021 drama My Roommate is a Gumiho, though you can probably guess what they have in common.

My Girlfriend Is a Nine-Tailed Fox provides examples of: