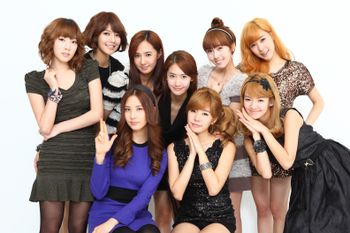 Formed in 2007 by SM Entertainment, Girls' Generation, often abbreviated as SNSD (short for the romanization of their Korean name, So Nyeo Shi Dae) is a popular Korean Girl Group that started with nine members. The group was initially seen, and to some extent still is seen up to today, as something of a female answer to labelmates Super Junior, but has since gone on to become a unique and equally respected group in their own right.

SNSD began to achieve widespread fame and appeal in 2009 after the release of their first mini-album and its leading single, "Gee". "Gee" has since gone on to become the group's most memorable and most lauded song, which was hailed as the "K-Pop Song of The Decade" by Melon (a Korean music website and award-giving body). "Gee" used to hold the distinction of being the longest-running #1 ranked song on Music Bank, one of Korea's most popular music chart shows, but it was eventually passed by the record-shattering hit "Gangnam Style".

After winning "Video of the Year" at the inaugural YouTube Music Awards on November 4, 2013, they have been pushed into the international spotlight once again. Despite getting flak from the fans of the other nominees, they have garnered attention and mostly praise from mainstream media. The win also made headlines in media outlets all over the world.

The girls are especially beloved among their fans due to their dorky natures when not performing and the copious amounts of Fanservice that they dish out. They are also well known for the Les Yay that the members often seem to be indulging in; the fans, of course, enjoy all this and do a little indulging of their own in the form of the sheer amount of Slash Fic they churn out featuring the girls.

Some of the group members (Taeyeon, Tiffany, Seohyun) have started solo careers on the side, and everyone except Hyoyeon has some form of an acting career, whether it be musicals or voice acting or TV dramas.

On September 29, 2014, Jessica announced via her Weibo that she had been kicked out of the group

, claiming the company and "eight others" had banded together to get her removed. SM Entertainment later released their own statement confirming Jessica's departure

but saying Jessica had actually been fired due to her allegedly

neglecting her group duties in favor of her own ventures. Jessica replied with another statement denying this

- to this day nobody outside of the members and the company knows for sure exactly what happened, and probably never will. In the years since, Jessica has pursued endeavors including a solo music career, a fashion line, and novel writing.

On October 9, 2017, SM announced that members Sooyoung, Seohyun and Tiffany had chosen not to re-sign with the company - Tiffany because she would be going overseas to study and work on solo activities, while Sooyoung and Seohyun wanted to focus on their acting careers.

The company stated "Girls’ Generation is a group that is precious and meaningful to SM and their fans. The members also have no thoughts at all about disbanding. Simply, as there are members whose contracts have ended, a careful decision will be made after discussions with the members about Girls’ Generation’s direction for activities in the future."

On August 2, 2018, it was announced that the five members of the group remaining under SM would be releasing a new single as "Girls' Generation-Oh!GG", and they debuted a month later with "Lil' Touch".

Not to be confused with the ruling party of the Republika Srpska!