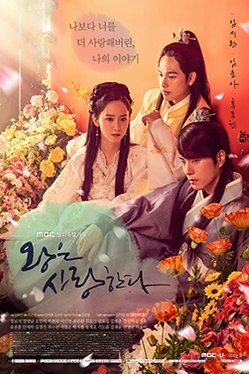 The King Loves
"This is the story of me, who came to love you more than myself."
— Wang Won
Advertisement:

왕은 사랑한다 (Wangeun Saranghanda; The King Loves or The King in Love) is a 2017 South Korean historical drama directed by Kim Sang Hyeop with screenplay by Song Ji Na. It is based on the novel of the same name by Kim Yi Ryung. It stars Im Si Wan as Wang Won, Im Yoon Ah as Eun San, and Hong Jong Hyun as Wang Rin.

This is story about friendship, love, and power. Crown Prince Won of Goryeo, whose good looks and eloquence hide his cruel and ambitious nature, and Wang Rin, Won's childhood friend and bodyguard, an elegant and refined man with an upright nature, both fall for the same girl, Eun San, the daughter of the wealthiest man in town, who possesses striking beauty and deadly charm.

The King Loves contains examples of: