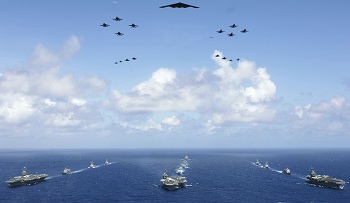 The US Navy shows off, with three carrier battle groups and a friend from the Air Force.note For perspective, there's more aircraft carrier tonnage in this picture than all other non-US carriers in the world combined. And the US has seven more.
Advertisement:

When you intend to impress (whether some characters by some other character, or your audience as the author), if it is a military or some other powerful organisation, the display of power is usually based upon personnel's numbers. This is the basis of Million Mook March.

Million Mook March tends to concern infantry. However, as it happens, such a display is not restricted to footsoldiers. If it is some kind of fleet you want to show, you can just as much make them run in squadrons, and the additional benefit is that in opposition to common soldiers, even a lone ship is likely to impress, either with her guns, or herself.

Thus, Flaunting Your Fleets is a scene made of exceptional display of power, usually (though not a necessity) military, inducing Squee in any closet militarist, often in form of squadrons upon squadrons, on the march or standing down, of starships, seaships, airships, airplanes or whatever else rocks your boat.