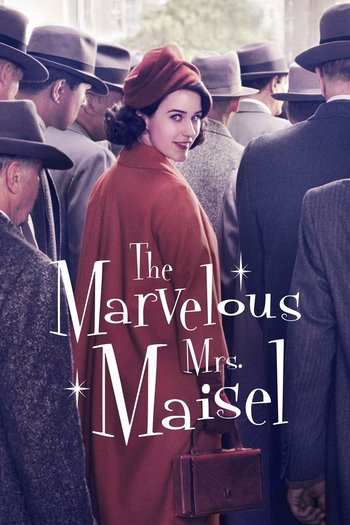 "I’m officially losing my mind, which is perfect. Now I will be alone and crazy, the famous mad divorcée of the Upper West Side."
— Midge Maisel
Advertisement:

The Marvelous Mrs. Maisel is a period dramedy series created by Amy Sherman-Palladino (Gilmore Girls) and produced by Amazon Studios for Prime Video. The first season was released on November 29, 2017, with a second season following a year later on December 5, 2018. The third season was released a year after that on December 5, 2019. The fourth season began production in January 2021 after an extensive delay caused by the COVID-19 pandemic and aired on February 18, 2022. Ahead of the fourth season's premiere, the show was renewed for a fifth and final season.

Beginning in 1958 New York City, the show stars Rachel Brosnahan as Miriam "Midge" Maisel, a vivacious Jewish housewife and socialite who has put all her focus into being the perfect daughter, wife and mother. However, her life is turned upside down when her husband Joel (Michael Zegen), an aspiring stand-up comedian, suddenly leaves her for another woman. Reeling, she stumbles onstage at the local comedy club to deliver a drunken tirade about her situation and discovers her own skill in comedy. With the help of the club's curmudgeonly manager Susie Myerson (Alex Borstein), Midge embarks on a new career in comedy while still picking up the pieces of her old life.

The show features quite a bit of detail on the entertainment scene of the 1950s and early '60s (including Lenny Bruce as a recurring character), as well as a lot of focus on upper-middle-class Jewish culture in the NYC of that era.