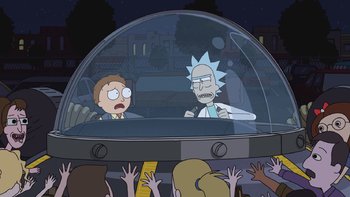 Love potion + Ordinary people = Morty-obsessed zombies that put The Walking Dead to shame.
Written by Justin Roiland
Directed by Stephen Sandoval
"Listen, Morty, I hate to break it to you, but what people call "love" is just a chemical reaction that compels animals to breed. It hits hard, Morty, then it slowly fades, leaving you stranded in a failing marriage. I did it. Your parents are gonna do it. Break the cycle, Morty. Rise above. Focus on science."
— Rick Sanchez. Morty doesn't listen.

Rick supplies Morty with a serum that will make Jessica fall in love with him at the school dance, but her flu virus causes the serum to spread and make everyone else fall in love with Morty, and Rick's attempts to fix things only make things worse and worse. Meanwhile, as things go to hell, Jerry goes out to prove his worth to Beth.