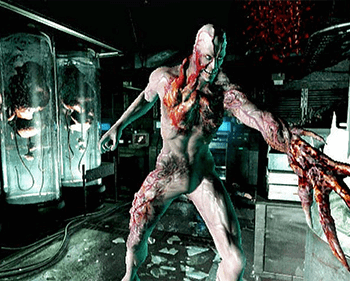 Some otherworldly horrors aren't bred. Some are designed.
"I escaped from the petri dish... WHAT AM I!?"
— Russel Howard, Mock the Week, "Unlikely Things to Hear on a Science Documentary"
Advertisement:

In most cases, the traditional Eldritch Abomination is something completely outside human comprehension. Maybe they're incredibly ancient, maybe they came from another dimension, or maybe they don't even obey our laws of physics. But sometimes, they have much closer ties to humanity... because humans made them. Enter the Genetic Abomination.

This is a specific subset of the classic Eldritch Abomination that is not a naturally-existing being, but was created and cultivated artificially, usually through genetic engineering. That doesn't make them any less horrifying — and in some cases, it could make them more so, since they are so different from the natural organisms used in their creation and proves how powerful their creator's capabilities really are. Their resemblance to natural organisms varies. At best, they'll just look like a warped version of the creatures that they were derived from, putting them in Animalistic Abomination territory. Other times, though, they'll bear absolutely no resemblance whatsoever to anything that ever evolved naturally.

The reasons for the creation of such a being are variable. Often it's some sort of living weapon that the creator would proclaim as their Magnum Opus, but it's also common for them to be created for other purposes. Note that to qualify for this trope, a creature cannot merely be a large, terrifying genetically engineered beast— it must also fit into the established definition of an Eldritch Abomination. This entails being inconceivably horrific for the majority of minds that encounter it, but (in a step-down from a natural abomination) not inconceivable to the mortal mind in general; after all, it was a certain kind of mortal thinking that brought it into existence.

A Sub-Trope of Genetic Engineering Is the New Nuke, seeing as it was bio-engineering that created these horrors. Likely to overlap with Bioweapon Beast if they were created for combat purposes, and can be a Custom Built Host for a real Eldritch Abomination. Might have Escaped from the Lab. For other artificially created Abominations, see Mechanical Abomination, and if both tropes overlap, the combination results in an unholy example of Organic Technology and Meat-Sack Robot.