Literature / Little House on the Prairie 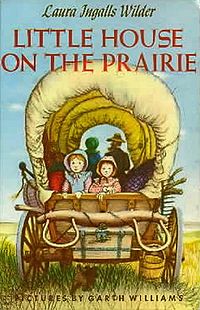 The eight books written and published by Laura Ingalls Wilder are Little House in the Big Woods, Farmer Boy (about her husband, Almanzo Wilder), Little House on the Prairie, On the Banks of Plum Creek, By the Shores of Silver Lake, The Long Winter, Little Town on the Prairie and These Happy Golden Years, chronicling Laura's life from her childhood in Wisconsin, to her marriage in what would later become South Dakota. A ninth book covering the tumultuous early period of that marriage, The First Four Years, was published posthumously.
Advertisement:

Not counting Farmer Boy, the first three and a half books of the original eight chronicle the Ingallses' family life as they move from place to place on the American West frontier, partially to carve out a better life and partially to satisfy Pa's "itching foot." Farmer Boy, meanwhile, chronicles a year in the life of nine-year-old Almanzo (the same year his future wife was born), growing up and working hard on his family's prosperous farm near Malone, New York.

The last three and a half books are about the Ingalls family settling permanently in the brand-new town of De Smet, Dakota Territory, as Ma has finally put her foot down and demanded that her girls receive a stable education. The Ingallses are also recovering from a bout of scarlet fever, which has left oldest daughter Mary blind. These books focus in on Laura's life as she grows up and struggles to find ways to help her parents survive on the harsh frontier, while also exploring life away from home. Oh, and falling in love with Almanzo, who has also just arrived in De Smet and is now ambitious for his own farm.

There is some contention about how much of the books are purely Laura Ingalls Wilder: the stories are hers, to be sure, but her daughter Rose Wilder Lane was a popular author and was instrumental encouraging her mother to publish her story. While Laura already had a background writing columns for local newspapers, some suggest Rose—who was an accomplished ghostwriter—wrote the books herself, while others suggest she merely offered advice and put Laura in touch with her publishing connections; the truth is likely somewhere between the two extremes. A study of the relevant correspondence between the two suggests that Rose's main concern was with the technical details of grammar and style, while her mother focused on character and plot. The First Four Years, which was written without Rose's help, is noticeably different in style to the rest of the series, but this may have more to do with the fact that it was apparently originally intended as a more adult take on the same material.

After Wilder's death, her daughter found her journal account of their move from De Smet to Mansfield, Missouri, and had it published as On the Way Home. Shortly after Rose's death, her lawyer and heir, Roger Lea MacBride, brought to light The First Four Years, which Rose had entrusted him with. MacBride also published a collection of letters Laura wrote to Almanzo while visiting Rose in San Francisco during the World's Fair, under the title West From Home. Not content to stop there, he also wrote a series of books about Rose, drawing on stories she told him as a child and tossing in a few creative liberties.

HarperCollins was similarly discontented, as they smelled a zombie franchise in the making - nearly half a century later! - and added to the Rose books, publishing an inter-generational Little House series about Laura's female ancestors:

HarperCollins also published books about Mary Ingalls and Nellie Oleson, an additional book about Almanzo, and Old Town in the Green Groves, a book about the "lost years" Laura felt were too painful to include in children's books, written by Cynthia Rylant.

These extra books vary in quality and success at emulating the charm of the originals, but all are interesting portraits of "America's favorite pioneer family."

Laura's autobiography Pioneer Girl, which she initially tried to publish before re-writing her life story as the Little House books, was published in October 2013.

A television adaptation began airing in 1974.

Disney adapted Little House in the Big Woods and Little House on the Prairie into a six-part miniseries in 2005. Carrie was Adapted Out of the story.