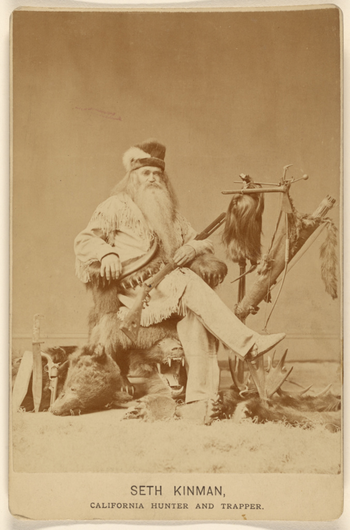 A character who makes his (or, rarely, her) legitimate living by hunting down animals for their meat and fur. Most often found in stories about America's frontier days, fading into The Western.

Generally, the Hunter Trapper will have or quickly acquire excellent survival skills and woodcraft, often with the aid of a Native American friend. Improbable Aiming Skills are common, but this character is seldom The Gunslinger, as in the early days, their rifles hold only one shot. Often wears a Coonskin cap.

Expect to see a successful Hunter Trapper garbed in the skins and furs of his prey, with the more ostentatious ones perhaps wearing claws and teeth as decorations. He's also likely to have an impressive beard, possibly unkempt. Many of these characters are The Stoic, uncomfortable with civilized society's demands for emotional involvement, but a few are Boisterous Bruisers instead, especially if they're Sidekicks. If it's a period Romance Novel, one might serve as the male Love Interest (though being "tamed" by the heroine is inevitable in this case.)

The French-Canadian version of this character is the Voyageur, or Coureur des Bois (literally "Runner of the woods"), actually rivermen who worked for the fur companies, but who did hunting and trapping on the side.

Often overlaps with The Pioneer; can turn into the Mountain Man if he decides to stay outside civilization permanently. May also qualify as a type of Intrepid Merchant, especially if he puts himself at high risk to gather pelts from dangerous animals because of the even higher chance of profit.

Subtrope of Classical Hunter. Contrast the Evil Poacher; compare and contrast the Roguish Poacher. Compare to Great White Hunter, who may well have the Hunter Trapper background.