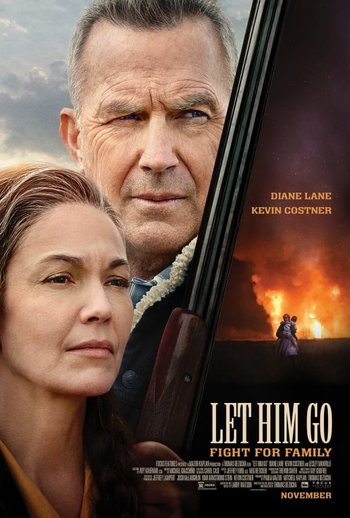 Let Him Go is the 2020 film adaptation of the 2013 novella by Larry Watson, directed by Thomas Bezucha and starring Kevin Costner and Diane Lane as a retired couple who make a cross-state trip to find their grandson.

In 1961, retired sheriff George Blackledge (Costner) and his wife, Margaret (Lane), suffer a devastating loss when their son, James (Ryan Bruce) dies during a freak horse-riding accident, leaving behind a widow, Lorna Blackledge (Kayli Carter) and their infant son, Jimmy.

Three years later, Lorna marries Donnie Weboy, a vindictive, violent man who Margaret witnesses hitting his wife and Jimmy during an incident at a supermarket. Suspecting that he's up to no good, Margaret attempts to defuse the situation — only to discover that Donnie has moved the trio to his family home in North Dakota without telling the Blackledges. Realizing that Lorna and Jimmy may be in danger, Margaret and George set out to cross into the state and rescue the pair, meeting a young Native American man (Boo Boo Stewart) along the way — but come into contact with the rest of Donnie's family, the Weboy clan, including Evil Matriarch Blanche Weboy (Lesley Manville) and her brother-in-law, Bill Weboy (Jeffrey Donovan).

The film takes cues from other Gothic Horror works, with Calgary, Alberta standing in for the hills and valleys of Montana and North Dakota.

The film was originally scheduled to be released in August 2020, but was delayed until November of the same year due to the COVID-19 pandemic.