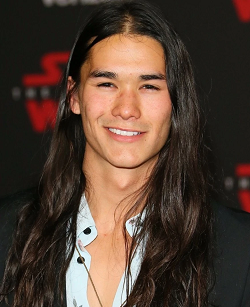 Nils Allen "Booboo" Stewart Jr. (born January 21, 1994 in Beverly Hills, California) is an American actor from Los Angeles. He has East Asian, European, and Blackfoot ancestry. He started out doing stunt work and minor roles, in addition to being a recording artist for Disney. His first major role was as Seth Clearwater in the Twilight series, which he followed up with the main roles in White Frog and Running Deer. He has Marvel cred from playing the role of Warpath in X-Men: Days of Future Past, and played Jay in the Disney Descendants franchise.