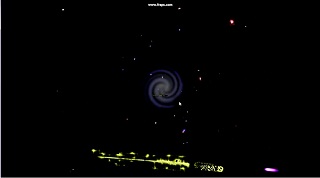 Yes, that's a galaxy in the center.
Advertisement:

. The game focuses on annihilating every other empire in the randomly generated galaxy.

Research has a massive focus in Star Ruler - you unlock subsystems by researching its specific upgrade (i.e. researching Energy Weapons will help unlock lasers). However, when a subsystem is first researched, it's usually weak - you need to continue to research in that field to make it more powerful. Eventually, you research how to build Ringworld Planets, blow up stars in an instant, build ships larger than the galaxy, and make ships that can carry itself inside its own cargo bay.

The game's starships have (somewhat) realistic physics, in that there is no friction - or a top speed, for that matter. Ship's effective speed is measured by their acceleration power. Ships moving between star systems accelerate halfway to their destination, then flip around and fire their engines backwards to slow down. The more engines a ship has, the faster it goes - but the faster it burns through its fuel supply. You can make the ship larger to fit in more engines, but then you have to push around even more weight.

Ship-to-ship combat is fast and brutal, with ships annihilating each other often in just a few salvos - sped up by the fact that weapons damage ship subsystems, and many subsystems are also explosive, such as ammunition or anti-matter. Entire fleets can wipe each other out in mere minutes, so positioning your ships to prevent mass losses is necessary when fighting equal forces.

Ships are designed by the players, who place different subsystems (such as engines, armor, guns, or support equipment) inside a circular "blueprint"

◊, which has a max subsystem size limit note such as limiting you to a combined total of 15 subsystems, if you make each subsystem a scale of 1.00.

The game's economy is simple at first glance, but very nuanced. Ships require Metal note processed from ore, Advanced Parts note processed from electronics and metal, Electronics note made from metal, and Labor note what is used to actually build stuff, generated by the population to be built, but planets, and your race as a whole may have modifiers on each stat. Food is necessary to keep your population from starving, and they want goods and luxury goods otherwise they'll produce less - unless you just enslave them. Unlike other games, ships, stations, and planetary facilities have no "build time" - if you have enough resources stored at the build point, you can build anything virtually instantly. If you don't have enough resources, the planet (or mobile shipyard) has to pull the resources from your Galactic Bank, the empire-wide resource depository.

Although it is completely lacking in narrative, its main appeal is probably... see the page image.

Star Ruler also has strong support for modding, with many aspects customisable in a humble text editor. Among the most popular of them is Galactic Armory

, which makes quite a few substantial changes to the gameplay. GA tropes go into a separate section.

Star Ruler 2 was released on March 27, 2015 after about a year in Early Access. Among a host of new features, micromanagement of planets is less painful, ship movement is smarter, combat is deeper, and diplomacy is more important.