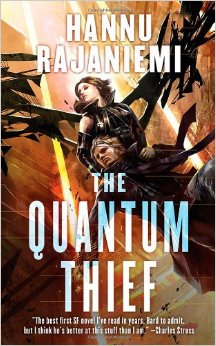 No one else will remember or know what we are going to say here. Even I will forget, unless you let me remember. This is the way things work here. No one has to be a stranger.
Advertisement:

The Quantum Thief is Hannu Rajaniemi's debut sci-fi novel, and the first of a trilogy.

In a post-Singularity solar system slowly being eaten by a community of uploaded minds, Mars has remained independent and unique thanks to its extreme attitude to privacy: all memory is externally stored and encrypted, and you can't access a memory unless everyone involved consents. This makes life pretty difficult for detective Isidore Beautrelet, but as a native Martian he wouldn't have it any other way.

Also due to make life difficult for Isidore is the Gentleman Thief Jean le Flambeur, a figure of legend who's modeled himself on Arsène Lupin. A debt of honor requires Jean to commit a daring heist, but first he must steal back his own memories from the Oubliette of Mars. He's accompanied by Mieli, the bitter transhuman masterminding the mission, her flirtatious spaceship, and the goddess she reluctantly serves.

The second part of the trilogy, The Fractal Prince, came out in late 2012. A physicist receives a mysterious paper. The ideas in it are far, far ahead of current thinking and quite, quite terrifying. In a city of fast ones, shadow players, and jinni, two sisters contemplate a revolution. And on the edges of reality, a thief, helped by a sardonic ship, is trying to break into a Schrödinger box for his patron. In the box is his freedom. Or not. Jean le Flambeur is back, and he’s running out of time.

The third and final installment, The Causal Angel, came out in July 2014. After the events of The Fractal Prince, Jean le Flambeur and Mieli are separated. The two protagonists, each in their own way, struggle to decide where their loyalties lie and how to proceed in the catastrophically altered situation. Meanwhile, the Solar System is plummeting into an all-out war. The most powerful factions, the Sobornost and the Zoku, are gathering their forces and making their plays, while simultaneously being torn apart by internal strife.