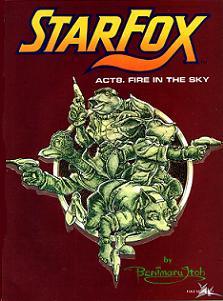 A monthly comic strip based on Star Fox, printed in issues 45 to 55 of Nintendo Power in 1993.

Written and illustrated by Benimaru Itoh, the comic is a canonical expansion of the original game's backstory and plot, following Ace Pilot Fox McCloud and his elite mercenary team, from their days as outlaw resistance fighters on Papetoon, to their becoming the heroes of the Lylat Star System. The first issue was published before the actual game was released anywhere in the world, making it the very first glimpse that Nintendo players and comic readers alike would see of the Lylat System. Despite being made in Japan, the comic was specifically intended for the English-speaking fanbase and was printed entirely in a left-to-right text format just like any western comic book. Benimaru Itoh also had a hand in the Star Fox Mission File Printout,

a strategy guide that also depicted an expanded canon.

Because it is an expansion of the story, the comic features several exclusive characters like Fara Phoenix, a vixen who becomes the fifth member of the Star Fox team after they save her from Venom's Imperial Guard.

A copy of the comic can be found at this link.

Not to be confused with Starfox from the Marvel Universe.