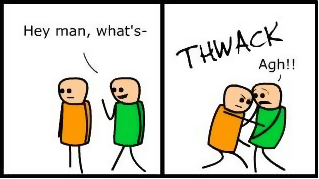 Bob has something important to tell Alice. She's busy and focused on something, and he's been told never to interrupt her... but this is important! Surely she won't mind... He taps her on the shoulder.

Alice punches Bob across the room the moment he touches her. Then she realizes who it was. "Bob! I told you not to sneak up on me like that!"

This trope is about any instance where a character attacks someone accidentally, just because they were taken by surprise. If it's being Played for Laughs, the attacker will usually utter some variation of the trope's title. However, if the victim is seriously injured (or killed), it usually leads to My God, What Have I Done? and Cradling Your Kill instead.

One common variation is for the victim to be playing a prank on the attacker by dressing as something they don't like, without considering that fear may lead to violence. Or it may be a subversion of Cooldown Hug, where it fails to have the desired effect and just angers the huggee even more (possibly leading to a Deadly Hug).

Friend or Foe is the Super-Trope, while Wake Up Fighting is a common Sub-Trope. Contrast The Anticipator. See also Cat Scare, Offhand Backhand, Stealth Hi/Bye, and Reflexive Response.

When Cricket and Gramma assume the worst about Rick, he overhears.

When Cricket and Gramma assume the worst about Rick, he overhears.