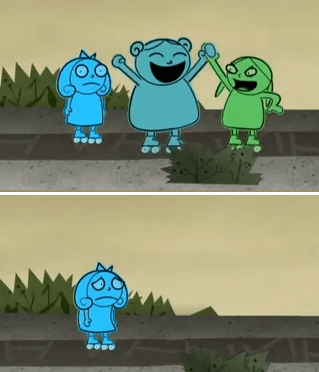 Two characters are best friends. One of them makes a new friend and the other gets jealous, thinking that they might replace them.

This is what is called New Friend Envy, where the other friend feels excluded or left out more often by both of them. Most of the time, it's just a huge misunderstanding. At the climax of the plot, the other friend may reveal that they just want to branch out more and find some new people to hang out with other than the same friend all the time. Sometimes, the new friend isn't really a nice person after all or hides their true colors around them and distances them from the other, possibly forcing the real friend to come to the rescue.

Bonus Points if the new friend is the new kid or a foreign exchange student.

Played for Drama if one of them ditches the other for their new friend. Examples like this could overlap with In with the In Crowd.

See also Jealous Pet, Territorial Comic Relief and Territorial Smurfette. The Trap Parents applies for cases in which a Heartwarming Orphan's new family take them away from their friends...and then turn out to be evil.