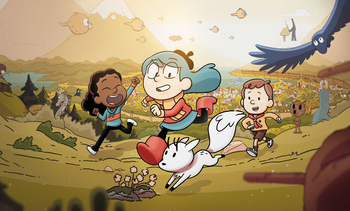 Hilda is an animated fantasy adventure series distributed by Netflix. It was adapted from the Eisner-award nominated graphic novel series of the same name and produced by Britain's Silvergate Media (creators of The Octonauts) and Canada's Mercury Filmworks (known for their work with Disney Television Animation), with original author Luke Pearson as showrunner. The series marks the first production by Silvergate Media to be targeted for older audiences.

The series follows the eponymous Hilda (Bella Ramsey), an 11-year-old blue-haired girl with a knack for befriending the magical creatures that populate her world, who must learn to make friends with humans as well after circumstances force her and her mother (Daisy Haggard) to leave her childhood home in the wilderness for the walled city of Trolberg... but that doesn't necessarily mean the end of meeting more of those supernatural critters, now does it?

The first season, released on 21 September 2018, consists of 13 episodes, adapting 4 of the 6 published books with a healthy dose of Adaptation Expansion in between. The second season premiered two years later on 14 December 2020, one episode adapting the 5th of the 6 books. When Sony Pictures Television acquired Silvergate, it was announced that a 85-minute movie special was in production

which would adapt the 6th book, Hilda and the Mountain King, and was released on December 30th, 2021.

Despite the graphic novel series coming to an end with a total of 6 books, as well as "The Mountain King" being the last book to be adapted, Luke Pearson expressed a desire to continue the series

. A third and final season, as announced by Ako Mitchell on Twitter

and officially by Silvergate Media

is currently in production, taking place after "The Mountain King".

The novelization of the series has its own page.

open/close all folders
#-A
B-D
E-L
M-P
R-Y
"Well, that was pretty traumatic. But such is the life of an adventurer."
Feedback