Merit Badges for Everything 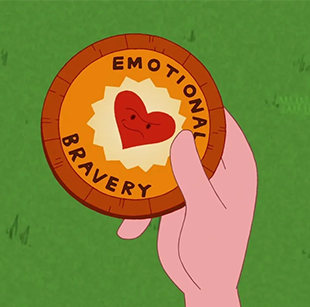 There's also one for putting an image on a trope page.
Carl: If you don't hurry up, the tigers will eat you!
Russell: There's no tigers in South America. [points to badge] Zoology!
— Up
Advertisement:

Primarily in comedy: With groups that are based on the Boy Scouts and what have you, you can name virtually anything, and odds are, there'll be a merit badge for it.

Sometimes this concept is used as a throw away line to explain some (suddenly essential) esoteric knowledge held by one of the heroes (particularly if they have not been set up as having those skills as part of their character):

"Bob, when did you learn to make a Ham Radio out of toothpicks and tinfoil?"
"Oh you know, I got my Amateur Radio Building Merit Badge when I was a Boy Scout — never had any use for it until now."

Might even be an Aesop of some kind about how Boy Scouts might be geeky or nerdy, but they do have some skills that come in handy at times, and maybe they are masculine after all.

Probably inspired by the Real Life Merit badges of:

Those six merit badges were the favorites of Boy Scouts at Scout Camp who needed an extra merit badge but didn't want to work too hard.

Then there were also the weird ones like Masonry which involved building your very own outdoors fireplace/brick barbecue.

Sadly most of the really odd ball ones were eliminated in the 90's (rabbit breeding, anyone?).

It's worth noting that many sources use "getting a merit badge" like winning an award, when the actual process involves meeting with an approved merit badge counselor, showing achievement of a specific set of criteria, and producing a formal writeup of the process for approval by said counselor and the relevant troop leaders — it's more like a short hands-on class (occasionally with homework) than it is a trophy.

Related to MacGyvering. (Boy Scouts is an organization dedicated to producing those guys with skills!) See also I Minored in Tropology.

Merit Badges of the Island

Oscar discovers they can get prizes by earning different merit badges on the island.

Merit Badges of the Island

Oscar discovers they can get prizes by earning different merit badges on the island.