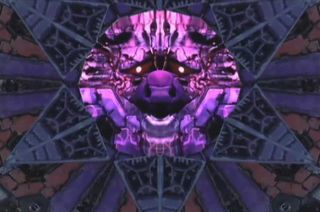 We will answer. We are the ultimate existence. You cannot resist us. You will join us.

You couldn't expect a game franchise about anthropomorphic animals piloting spaceships to be a possible source of Nightmare Fuel... until you remember it's made by Nintendo.

Then you manage to understand the reason behind such Mood Whiplash, Surprise Creepy, and Surprisingly Dark Villains. Because, well, it's Nintendo after all.