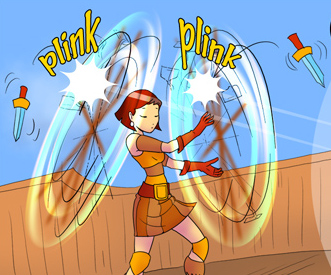 The principle is simple: spin a rod (or rod-like object) fast enough and you can get it to function as a makeshift shield. Of course, this raises questions like how it can be done without injury (human joints have limited articulation), how the rod can get up to speed fast enough to actually block stuff, how the user manages to recover from the exertion so quickly, and if bullets are being blocked, how the rod isn't damaged if it's not stronger than usual. Your answer? It's cool.

An example of Implausible Fencing Powers and Sister Trope to Parrying Bullets, but can be done with any long and thin object. If it goes beyond deflection into redirection, you get an Attack Reflector. Distinguished from a plain I Know Karate display because it's normally only done when there are dangerous airborne objects approaching. Simple Staff users can be counted upon to do this at least once in their careers. This can also be done using a Spin Attack with almost anything, even your entire body!

This is a tiny bit Truth in Television in that a few hundred years ago, when bows were the norm rather than guns, there were martial artists who claimed that they could spin a staff fast enough to deflect arrows.note An arrow is about a meter long, so to block one reliably, the staff has to complete half a revolution/second for each meter/second of speed the arrow has. Even at a mere 10 m/s (slower than a sprinter), that's 5 rev/s... hard to pull off continuously, but it only needs to be spun for the brief window between the arrow being en route and being in your chest. A medieval-style longbow can fire at 60 m/s, requiring 30 rev/s. If you could spin a staff half that fast, you could stick airfoils on it and become a human helicopter. To its credit, rotating slower would still provide a better defense than just holding a weapon steady, though not nearly to the degree that it's most commonly depicted.

Of course, now we do it for bullets and lasers, but nobody seems to mind a lot because it's quite a sight to behold.