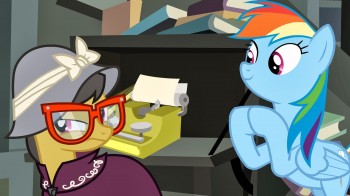 If you think Rainbow is a Fangirl now, just wait till after The Reveal.
Ahuizotl: The ring, Daring Do! Give it to me!
Daring Do: Now, Ahuizotl, you know I love you, but I can't give you the ring till I've properly proposed.
Written by Dave Polsky
Advertisement:

Rainbow Dash is eagerly counting the days until the release of the next Daring Do novel. Then she arrives at Twilight's library during Pinkie Pie's party for National Random Holiday Party Day and learns the book has been delayed by two more months! Crushed with anticipation, Dash decides there's only one solution: find where Daring Do author A.K. Yearling lives and help free her from all distractions so she can finish the book.

Upon finding her home in a remote jungle, the Mane Six discover the author's house ransacked, Yearling herself arriving not long after. While Rainbow Dash professes her love for the Daring Do books (and the rest of the Mane Six insist they had nothing to do with the state of her house), all Yearling seems concerned with is a book containing a large gold ring. Twilight pulls Rainbow Dash out of the house to scold her for her pestering, when they spot a trio of bandits breaking into the house. Cornered, Yearling throws off her coat and reveals a startling secret: A.K. Yearling is Daring Do!

While Daring is able to fight the bandits off for a while, the ring falls into the hooves of their leader Dr. Caballeron, who plans to sell it to the evil Ahuizotl to use for an evil ceremony that will bring about 800 years of intense heat to the valley. Daring Do sets out to stop them with Rainbow Dash following, but her fangirl tendencies only serve to annoy the adventurer, who insists that she works alone. Daring Do disguises herself and almost succeeds in buying the ring back from Caballeron when Ahuizotl storms the scene, demanding the ring. Daring manages to fight the fierce cats Ahuizotl sics on her, but Rainbow Dash complicates things by getting herself noticed, distracting Daring long enough for the adventurer to get captured.

Twilight and the others catch up with Rainbow to find her kicking herself over letting her hero down. Just as Rainbow decides to head home, her friends insist that Daring needs her help now more than ever — she may be her hero, but she's a pony like anyone else. Rainbow has a change of heart and swoops into Ahuizotl's nearby temple lair to save Daring from a pool of piranha fish. Daring relents and brings Rainbow to the temple's central altar while the others distract Ahuizotl and his henchponies from completing their ceremony. Rainbow and Daring remove all of the mystical gold rings from the altar, causing the temple to collapse and thwarting Ahuizotl's plans. Daring thanks Rainbow for her help and flies off to start her new book, which she mails to Rainbow Dash: Daring Do and the Ring of Destiny, with an expy of Rainbow on the cover.