Recap / My Little Pony: Friendship Is Magic S4 E5 "Flight to the Finish" 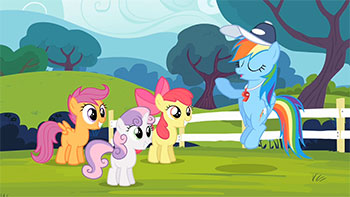 Professionally speaking, stop trying to make it 20% cooler.
Scootaloo: If we wanna win, I'm gonna have to fly!
Sweetie Belle: ...Is that even possible?
Written by Ed Valentine
Advertisement:

One day, Cheerilee's classroom is visited by Miss Harshwhinny, the head of the Equestria Games. She announces that the class can have the honor of carrying a flag at the Equestria Games in the Crystal Empire if they win a skit competition, with Rainbow Dash helping to provide feedback... with "professionalism", of course. The Cutie Mark Crusaders decide to enter the contest, intending to show off Ponyville as a place where ponies of all different types come together as friends.

Diamond Tiara and Silver Spoon, who have also entered the competition, attempt to get under the Crusaders' skin by saying that they can't represent Ponyville as "blank flanks". This doesn't slow the Crusaders down at all, as they come up with an impressive routine in just a day that amazes everypony — even the bullies! Rainbow, still trying to maintain an aura of "professionalism", tells them the skit was "okay" and suggests they tweak it more. Worried that the Crusaders' routine will beat theirs, Diamond Tiara and Silver Spoon decide to mock Scootaloo's inability to fly, saying that Miss Harshwhinny will never pick a pegasus who can't fly to represent Ponyville.

Scootaloo is deeply affected and changes the whole routine around, ending up making it almost all about her attempts at flight. Try as she might, Scootaloo can't muster up the wing power to fly, which exhausts Apple Bloom and Sweetie Belle after they spend the rest of the day practicing. By the time they have to put on their second and last rehearsal before the competition, the three are so exhausted that their act leaves much to be desired. Fed up with Scootaloo's attitude, Apple Bloom and Sweetie Belle leave her to practice on her own. After hours of fruitless labor, Scootaloo finally gives up hope that she will ever fly, leaving her disgruntled friends to board the train to the Crystal Empire without her.

When Rainbow Dash hears what happened, she chews them out for abandoning Scootaloo, then stops the train and rushes the two Crusaders back to Ponyville. Scootaloo is still kicking herself over her inability to fly like her idol, but Rainbow Dash tells Scootaloo that she shouldn't try to be Rainbow Dash; she should try to be herself, because she's already got her own talents. With some reassurance from her friends, Scootaloo perks back up, hopping on her scooter and speeding to the Crystal Empire with the other Crusaders in tow. The Cutie Mark Crusaders win the competition, earning the right to carry the flag in the Equestria Games. Scootaloo turns and looks expectantly at her flank... then gets the idea that they could get their cutie marks in flag-carrying!

Flight to the Finish

While the CMC prepare to present their routine, Diamond and Silver happen to be watching them.

Flight to the Finish

While the CMC prepare to present their routine, Diamond and Silver happen to be watching them.