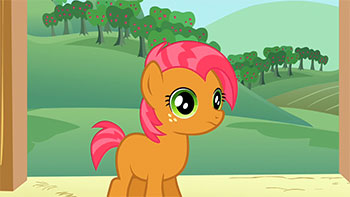 She looks so innocent, though! How bad can she possibly be?
Apple Bloom: We're not snitches!
Scootaloo: Yeah! And we're not babies!
Sweetie Belle: Then... why do I feel like crying?
Written by Cindy Morrow
Advertisement:

Apple Bloom is anxious to meet Babs Seed, her cousin from Manehatten who's visiting for a few weeks, especially since Babs doesn't have her cutie mark either. The Cutie Mark Crusaders give Babs the grand tour of their clubhouse and show her their float for the upcoming Summer Harvest Parade, intent on inviting her into their club. Soon Diamond Tiara and Silver Spoon show up and waste no time picking on the new "blank flank". Feeling insulted by their mean comments, Babs begins acting like a bully as mean as they are and knocks off one of the float's wheels, sending it rolling and crashing outside. She then trots off with her two new snobbish friends, leaving the Crusaders feeling crushed.

Sweetie Belle insists on telling Applejack about Babs' bad attitude, but Apple Bloom and Scootaloo are terrified of what Babs will do to them for snitching, and would much rather try to avoid her until her visit is over. This proves to be a challenge, since Babs, Diamond Tiara, and Silver Spoon are always one step ahead of them to make their lives miserable. Finally, when Babs kicks the Crusaders out of their clubhouse, the three decide it's time to get back at her by building a new float rigged to go off course into a muddy lake. On the day of the Summer Harvest Parade, Babs can't resist kicking the Crusaders out of their golden apple float to ride for herself. The three gloat over their plan's success until Applejack compliments the Crusaders for letting Babs ride their float; after all, Babs was bullied back in Manehatten for being a blank flank, and came to Ponyville to escape it all.

Realizing the error of their ways, the Crusaders hitch a ride on Pinkie Pie's float to warn Babs of her sabotaged ride. However, they fail to convince her in time before the float makes its way towards the lake. Acting fast, the Crusaders leap into the float and push Babs out as it crashes into the mud. Babs is touched the Crusaders would save her after all she did to them, and all is forgiven now that the four fillies have learned that nothing good will ever come of bullying, no matter what the reason. Applejack also brings up how the whole situation could've been avoided if any one of the fillies just spoke up, with Sweetie Belle pointing out that she kept on saying that. As a sign of their new friendship, Babs is accepted into the Cutie Mark Crusaders as their fourth member. Soon the time comes for Babs to leave, but not before Babs promises to talk to her family about the teasing back home, and gives Diamond Tiara and Silver Spoon a good talk-down about their bad attitudes for good measure.