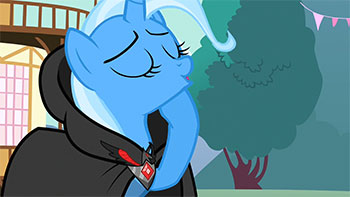 Back in black!
Snails: Why is she so mean to us?
Snips: Yeah! I miss the days when she was just a fraud!
Written by M.A. Larson
Advertisement:

One dark and stormy night in Canterlot, a figure dressed in a black cloak enters a curio shop and requests to buy a red-and-black amulet shaped like a winged unicorn. The shopkeeper recognizes it as the Alicorn Amulet, "one of the most mysterious and powerful of all the known magical charms", but is reluctant to sell it until the cloaked figure deposits a large bag of bits on his counter.

In Ponyville, Twilight is getting ready for a magic show for Princess Celestia and some delegates from Saddle Arabia when Rainbow Dash crashes into her with some shocking news—the "Great and Powerful" Trixie, the cloaked figure from before, has returned to Ponyville and is tormenting the townsponies with greater and more powerful magic than before. It turns out Trixie's still bitter with Twilight for (unintentionally) humiliating her and ruining her magic career after the whole "Ursa Minor" incident. Now she's out for Twilight's blood, and she won't stop attacking the town until Twilight agrees to her terms:

Their spell-casting duel starts out straightforwardly enough—Trixie attacks Twilight with her spells, and Twilight uses her own to defend herself. But the real challenge comes when Trixie casts an age spell that turns Snips into a foal and Snails into an old pony, which only the most powerful of unicorns can do. Because Twilight cannot lift Trixie's age spell, Trixie declares herself the winner, literally throws Twilight out of Ponyville, and conjures a magic dome around the town to keep her out and everypony else in.

Trixie proves to be not only stronger, but meaner and nastier than ever as she takes over Ponyville. Twilight's friends are none too pleased with her tyranny and search Twilight's library for answers. They find out that Trixie's Alicorn Amulet has not only given her unparalleled magic power, but is also corrupting her with evil magic and, courtesy of a magic lock, can only be taken off by its wearer. Fluttershy is smuggled out of Ponyville by her woodland critters to give Twilight the news in the Everfree Forest, where she's been training with Zecora. The zebra shaman comes up with a solution:

Advertisement:
Zecora: If Trixie's tricks have you in a fix, you must nix your magic and use the six.

Twilight returns to Ponyville and challenges Trixie to another duel, this time armed with her own "totally awesome" amulet given to her by Zecora. Trixie can't resist finding out what powers Twilight's amulet has that make her rival so confident, and accepts the challenge. They start with a "simple" age spell, but not only does Twilight successfully pull off an age spell that turns Applejack and Rarity into fillies, old mares and back in a manner of seconds, she can also create an exact duplicate of Rainbow Dash, make Pinkie Pie play ten instruments at once, and turn Applejack into a stallion—tricks not even the Alicorn Amulet can do! The power-mad Trixie takes off the Alicorn Amulet and steals Twilight's obviously superior amulet for herself...

To her horror, the spells with her new amulet hardly have any effect on Rainbow Dash as she snatches the Alicorn Amulet from her hooves and gives it to Zecora to hide away forever. Twilight reveals her amulet is a fake, and her impressive feats of magic were nothing but smoke and parlor tricks pulled off by her friends. With Ponyville back to normal, Twilight puts on her magic show for Princess Celestia and the Saddle Arabia ponies as planned, with a fireworks display at the end from Trixie as a gift of gratitude for saving her from the Alicorn Amulet's evil. Though still as boastful as ever, the "Great and Apologetic" Trixie is forgiven and runs off into the night.

Well, not everything is back to normal just yet, as Pinkie is still missing her mouth. Luckily, Twilight comes onto the scene and restores it, and Pinkie happily takes a deep breath to speak...

A magic duel between unicorns Twilight Sparkle and Trixie Lulamoon.

A magic duel between unicorns Twilight Sparkle and Trixie Lulamoon.