Recap / My Little Pony: Friendship Is Magic S3 E10 "Spike at Your Service" 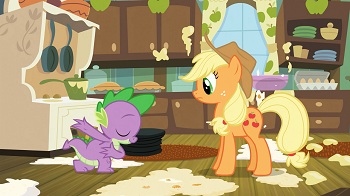 He will serve you... for the rest of your life! May Celestia have mercy on your soul.
Spike: Twilight, Applejack just saved my life from horrible, dragon-eating timberwolves.
Twilight: (reading a book) Mm-hm.
Spike: And, as you are aware, I adhere to my Dragon Code, and this means I must serve her for the rest of my natural-born days. I'm sure you understand.
Twilight: (still reading) Mm-hm.
Spike: It's been an honor being your faithful assistant.
Twilight: (still reading) Sounds good.
Advertisement:
Story by Dave Polsky
Written by Merriwether Williams

Twilight Sparkle is busy cramming for Princess Celestia over the weekend, giving her faithful assistant Spike plenty of free time to do whatever he wants... if only Spike had anything better to do. A nearby Twinkling Balloon ride seems promising, but Spike accidentally sets the balloon loose and sends it floating away. By the time Spike catches it, he finds himself deep in the Everfree Forest and chased by timberwolves. Just as the wolves close in to gobble up the baby dragon, Applejack (who's there to investigate the balloon) heroically steps in and smashes the wooden wolves to pieces.

Because Applejack saved his life, Spike insists on helping Applejack around Sweet Apple Acres. Applejack's okay with letting him help for the day — though being a farmhand isn't Spike's strong point, which he quickly proves by clumsily causing more trouble than good. Still, Spike sticks around the farm to fulfill his "Dragon Code" in which dragons must prove their nobility by serving their savior to the end of their days. Spike is reminded that he's still Twilight's assistant, but Twilight's so caught up in her studies that she absentmindedly gives Spike her blessing to stay with Applejack, meaning he's free to "help" the Apple family forever!

Applejack can't stand the messes Spike keeps making of things, but doesn't have the heart to make him think he's not a noble dragon. She and the other ponies do everything they can to keep Spike preoccupied but they all backfire spectacularly—Spike easily tackles Rainbow Dash's "impossible" task of building a tower of rocks for her to smash through and Fluttershy's suggestion to tell him Applejack doesn't need help makes him find other ways to help her, from scratching her back to breathing. Finally at the end of her rope, Applejack snaps Twilight out of her study-induced trance for help. Twilight comes up with the solution: make Spike truly feel even by saving Applejack's life.

The plan is to set up a fake timberwolf attack where Applejack pretends to get her leg stuck between some rocks so Spike can free her. Unfortunately, Spike sees right through their makeshift timberwolf puppet... until a pack of real timberwolves show up. Applejack easily smashes these wolves, only to get truly stuck under a rock as the wolves reform into one giant monster. Spike springs into action and chucks a rock down the timberwolf's throat, buying him enough time to save Applejack and finally end his life debt. Life returns to normal for the two after they promise not to owe each other anything if they ever have to save each other from certain doom in the future.

Advertisement:
Note: This is the tenth episode of the third season, but was the ninth released and aired.