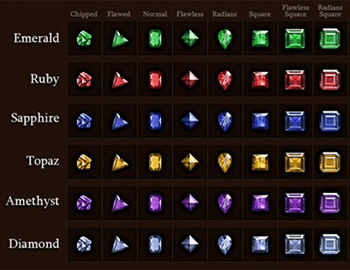 This is a visual shorthand trope that makes gems identifiable on sight, often reducing gems to Palette Swaps of each other. In Real Life, there are many features that differentiate minerals, gemstones, precious metals, and organic gems from each other: hardness, smoothness, clarity, a range of possible colors, and location found. But the only feature the audience can directly see for themselves, and that most people outside of geologists are readily familiar with, is color. Therefore, gems in fiction will often be identified solely by color, with a standard set of gem-color associations dictating the types of gems. The gems may be identical aside from the differences in color.

Generally, the code is as follows:

See also the Birthstones in the Real Life section for more.

Often these gemstones are seen together as a set of Mineral Macguffins. When it's more generalized (i.e. all red gems are rubies, all orange gems are topaz all the way down the rainbow), it's never brought up why there's so much mineral diversity in one area. If a gemstone is not the usual color, that is usually a plot-relevant detail.

If there's gemstone Theme Naming going on, this trope functions in essentially the same way as Color-Coded for Your Convenience. "Ruby" is synonymous with "Fancy Red" and so on. This may also double as Fancy Color Coded Elements, such as having a Fire Ruby.

A subtrope to Color-Coded for Your Convenience for gemstones. It can be related to One Steve Limit, Color-Coded Characters and Color-Coded Elements. A sister trope to All-Natural Gem Polish.