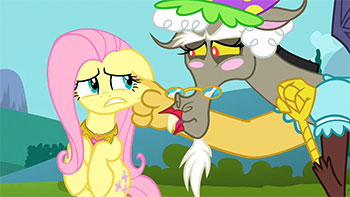 He's BACK! All that's missing is the mariachi band.note Oh, and just because we can't resist: Zaba-caba-dabra! Granny's gonna grab ya!
"Hang on to your Elements, girls. It's gonna be a bumpy night."
— Twilight Sparkle
Special Guest Star: John de Lancie as Discord
Story by Teddy Antonio
Written by Dave Polsky
Advertisement:

Princess Celestia calls Twilight and her friends to meet her on the outskirts of Ponyville and she's bringing along an important visitor. He's not only a lifeless stone statue, but also has a deer antler, a goat leg, a bat wing, and a snake tail: Discord! Seeing how the wicked spirit of chaos and disharmony turned Ponyville upside-down and nearly destroyed their friendship the last time they met, the ponies are naturally outraged. Princess Celestia assures them she has found use for Discord's magic if he can be convinced to use it for good of his own will. She commissions the six bearers of the Elements of Harmony for the job—particularly Fluttershy, because of her affinity for animals. The Princess adds she cast a spell on the Elements so they won't go missing again like last time.

Reluctantly, the six use the Elements of Harmony to release Discord from his stone prison. Discord, having heard Celestia's plan, isn't the least bit keen about the idea of being reformed and gets right to work on changing the woodland critters around him. The ponies give him an ultimatum he can't refuse: behave or they'll turn him back to stone. He agrees to tone down his chaos and crash at Fluttershy's cottage so she can "reform" him, but not before bewitching a colony of beavers in Sweet Apple Acres behind everypony's backs...

Fluttershy believes the key to turning Discord good is to befriend him by being as kind as she possibly can. Her friends have their doubts and promise to remain close in case anything goes wrong. They decide to make a back-up plan but unfortunately, they're unable to since Discord has torn out and eaten all the pages in Twilight's books containing information on spells that could reform him forcibly. Even so, Fluttershy is convinced that she's making progress with the trickster, and invites all her friends over for a dinner party to prove it. The party goes about as well as Fluttershy's friends expect, what with Discord bringing the tableware to life and playing pranks on everypony. Still, Fluttershy puts up with it all because, in her words, that's what friends do—and to the surprise of everyone, Discord seems genuinely touched that Fluttershy is willing to be the first friend he's ever had.

The tender moment is ruined when Angel Bunny barges in and warns everypony that bewitched beavers have dammed up the stream at Sweet Apple Acres and flooded Applejack's orchard to the canopy. As it turns out, Fluttershy has seen Discord's dirty work coming and puts him to the test, demanding he return the orchard to normal. Discord agrees on the condition she remove her Element and never use it on him, which she accepts... and then he turns the flood into an ice skating rink. Discord gloats that his friendship with Fluttershy has left him eternally free of the Elements, but Fluttershy, still honoring her end of the deal, now refuses to acknowledge him as her friend. This doesn't sit well with Discord at all:

Discord: I'm Discord! The Master of Chaos! You think you can boss Discord around? You think I'm going to turn all this back because you say so? Because if I don't, I'll lose the one friend I ever had?

Suddenly, Discord realizes that he does value his friendship with Fluttershy too much to lose it, and restores Sweet Apple Acres to its original, harmonious state. Everyone congratulates Fluttershy for accomplishing the seemingly impossible task of reforming the spirit of disharmony. Discord vows to Princess Celestia that he will use his powers for good rather than evil (most of the time), while Celestia decides to put the Elements under Twilight's care from now on, just in case...

Note: This is the eleventh episode of the third season, but the tenth aired.