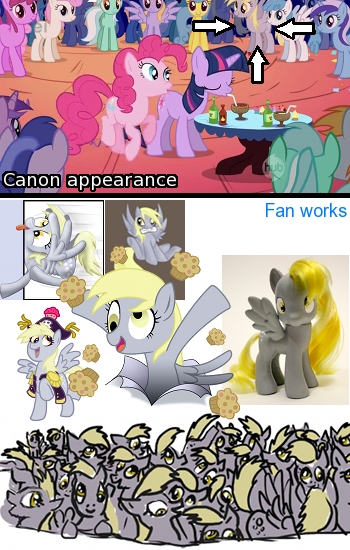 And then she became an official character!
Advertisement:

All shows need to have extras. Whether they're the Faceless Masses or a Cast of Snowflakes, everything needs to have some way to show the main characters are not the only people existing in the world (unless, of course, that's the point). But every now and then, someone will stand out... and all of a sudden they become incredibly popular for whatever reason. They may be endowed with a Fan Nickname, and a whole Backstory and personality may be extrapolated... from just one character, with few or no lines and highly limited appearances.

The fandom may latch onto these characters because they are either a Recurring Extra or a One-Scene Wonder. If the creators of the work get wind of this phenomenon, the character may become an Ascended Extra. Compare the Ensemble Dark Horse, who is a popular minor character instead of a background character. Can overlap with Memetic Badass, but not all the time. See also O.C. Stand-in and Recurring Fanon Character.