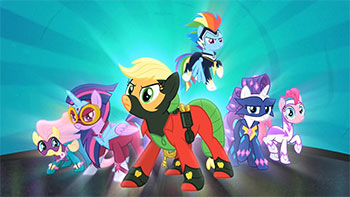 The Power Ponies in all their glory. Humdrum/Spike isn't in this pic, but so what? He's useless anyway.note In the comic universe, from left to right: Saddle Rager, the Masked Matter-horn, Mistress Mare-velous, Radiance, and Fili-Second. Top: Zapp.
Spike: Holy new personas, ponies!
Written by Meghan McCarthy, Charlotte Fullerton & Betsy McGowen
Advertisement:

Spike is enraptured with a comic book about the Power Ponies, a team of superheroes who are fighting to stop the evil Mane-iac from destroying the city of Maretropolis with her doomsday weapon, powered by the Electro-Orb! Accompanying the Power Ponies is Humdrum, a character with no powers who is "generally useless". Spike can relate, with the Mane Six cleaning up Celestia and Luna's old castle without needing his help.

After finding a quiet corner to finish reading his comic book, Spike reaches the last page, only to find it blank except for some small writing. Upon reading it, the comic suddenly lights up, causing Spike and the Mane Six to be sucked into the comic book! When Spike awakens, he finds himself assuming the role of Humdrum, with the others in the roles of the Power Ponies. They arrive just as the Mane-iac steals the Electro-Orb, with Spike determining that the only way to get back to Equestria is for them to stop the Mane-iac. The Mane Six, as the Power Ponies, attempt to stop the villain with their new superpowers... with no success, since none of them know how to use their powers, and Fluttershy, whose power requires her to get angry, is too docile to use her ability.

He sneaks his way into the factory, where the Power Ponies are being kept frozen in a cage by a steady dose of the Hairspray Ray of Doom. The Mane-iac reveals she intends to use the Electro-Orb to power a doomsday weapon that will amplify the power of her mane, releasing a blast that will cause everypony's mane in Maretropolis to grow wild. Fluttershy points out that Spike is still free, which the Mane-iac laughs off, once again calling him useless. Twilight, however, says that in their world, Spike always comes through when they need him. Overhearing, Spike is touched, and manages to find it in himself to distract the Mane-iac long enough to free the Power Ponies from the Hairspray Ray of Doom. As they neatly dispose of the Mane-iac's Mooks, the Mane-iac readies her doomsday weapon at Fluttershy, swatting away a firefly from her line of sight. That causes the animal-loving Fluttershy to finally get angry, blasting the Mane-iac with her own weapon, tying her up in her own mane with Fluttershy smashing the weapon to pieces.

With the Mane-iac defeated, the Mane Cast are transported back to Equestria. Spike says he's learned that you don't need superpowers to be a superhero, or to be a super friend. When asked how a comic book could have sucked them all in, Spike reveals he bought the comic from the House of Enchanted Comics in Canterlot, thinking the "enchanted" part was just a name. As the Mane Cast walk away, the comic vanishes from the mantel behind their backs.