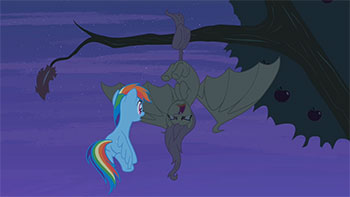 Applejack is up bright and early for Apple Bucking Day, the first day of the harvesting season. But, much to her dismay, she finds her apple orchard has been infested with vampire fruit bats that are sucking all of the juice from her crop. She gathers the rest of the Mane Cast and insists that the bats need to be driven off — besides just her livelihood, Applejack is concerned with protecting a giant apple that the Apple family is growing for a competition in Appleloosa. The ever animal-loving Fluttershy, however, argues that vampire fruit bats are vital to producing stronger, healthier apple trees, and suggests they build a sanctuary for the bats instead. To her dismay, Applejack does the better job of persuading the rest of the Mane Six that immediate action must be taken to save the orchard.

At Twilight's library, the Mane Six come up with a plan to drive the vampire fruit bats away: after the rest of her friends round up the bats, Fluttershy will use her Stare on them while Twilight casts a spell to make them no longer want to suck the juice out of apples. Though reluctant, Fluttershy eventually agrees, and the plan appears to be carried out flawlessly. The next morning, Applejack returns to her orchard to buck the fresh apples from the trees, only to find them still rotten. Thinking their plan failed, she brings her friends back to find the bats are refusing to eat the apples — if the spell worked, then who's eating the apples now? Twilight decides that the only way to find out is to catch the culprit in the act. That night, the Mane Six patrol through Sweet Apple Acres, with Fluttershy unable to resist staring in hunger at the apples...

Soon, Pinkie Pie discovers the culprit: it's Fluttershy, who's been turned into a vampire batpony! The others try to reason with her, but "Flutterbat" is only interested in draining the life from Applejack's apples. Twilight says that when she cast the spell, the thirst for the apple juice must have been transferred to Fluttershy through her Stare, giving her the ravenous hunger for fruit of the vampire fruit bats. After repeated efforts to catch Flutterbat fail, Pinkie Pie gives Twilight another idea: get Fluttershy to use her Stare on herself. The Mane Cast use the Apple family's prized apple to lure Flutterbat to them, then surprise the vampire batpony with mirrors, reflecting her Stare. This works long enough for Twilight to cast a counter-spell, turning Fluttershy back to normal.

The next morning, the Mane Cast have finally taken Fluttershy's original idea to heart and set up a vampire fruit bat sanctuary in the orchard for the bats to live. Applejack and Fluttershy apologize to each other, Applejack learning that her short-term solution was short-sighted, and Fluttershy learning to stand up for what she believes in, even if it's not the most popular decision. Everypony laughs, none of them noticing the small fang still growing inside Fluttershy's mouth...