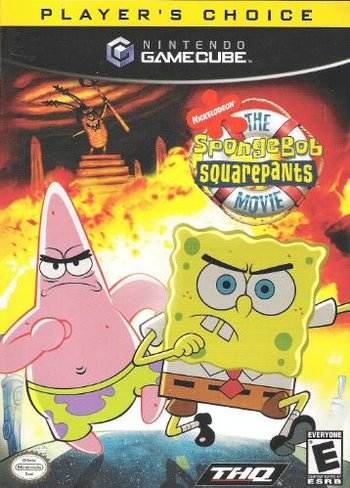 "Vacuuming up manliness, even in the corners!"
—SpongeBob
Advertisement:

The video game adaptation of The Sponge Bob Square Pants Movie, made by the same company as SpongeBob SquarePants: Battle for Bikini Bottom, Heavy Iron Studios (thus as a result uses the same engine). The plot more or less follows the film, but with a few changes made. While David Hasselhoff makes a guest appearance in the movie, the game doesn't actually refer to him by name.

There was also a PC version made, and it was a Point and Click Adventure game (modeled after Employee of the Month), as well as a GBA version, which was, for the most part, a 2D Platformer.