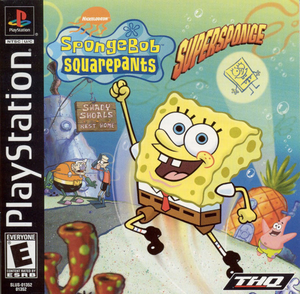 SpongeBob SquarePants: SuperSponge is a Platform Game released for the PlayStation and Game Boy Advance in 2001. The game was developed by Climax Group and was published by THQ. It was one of the sponge's first games, preceded only by Legend of the Lost Spatula for the Game Boy Color.

SpongeBob is in search of the best birthday present for his best friend, Patrick Star. And what could be better than an autograph from his favorite superheroes, Mermaid Man and Barnacle Boy? Unfortunately, they are less than happy to see SpongeBob and decide to keep him away by giving him quests that could potentially harm or kill the little sponge, but naturally, he is determined to fulfill their requests no matter what.

And so is the beginning of a brand new adventure where SpongeBob will journey through Bikini Bottom, Rock Bottom, through the center of the earth, and even through time to save Patrick's birthday!

It's SpongeBob's first step into the world of console platforming. Seeing the fun and lovable sponge embark on a grand journey is a pretty big step from what we've seen from his show. He is now leaping through lava, travelling through time, and closing down canning factories, all while retaining his optimistic and carefree personality.

The game is divided into five "chapters" which consist of four levels in which SpongeBob must collect four things needed to fulfill Mermaid Man and Barnacle Boy's requests. (e.g. Chapter One has you finding ingredients to make Mermaid Man a sandwich.)

Notably, it is interesting to know that since 2016, various development builds, prototypes, and asset discs for the game have been discovered and dumped onto the Internet, revealing various scrapped ideas and assets that can be seen in the Trivia page.