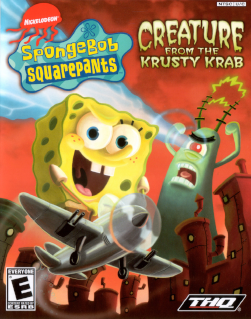 "Ah! Peaceful, sleepy Bikini Bottom! The creatures of the sea are deep in slumber, their night-brains exploring the mysterious world of dreams..."
— The Narrator
Advertisement:

The game follows the adventures of SpongeBob, Patrick and Plankton as they travel through their dreams. However, as the player goes deeper into the game, things become... strange. The three protagonists each have their own stories that eventually intersect with each other.

Containing things like edgy versions of the SpongeBob crew, a trip inside an Alaskan Bull Worm, and a giant Plankton wrecking Bikini Bottom, this game is... interesting, to say the least. The game is also released in Japan for the Wii and PS2 versions.

SpongeBob SquarePants: Creature from the Krusty Krab provides examples of the following tropes: