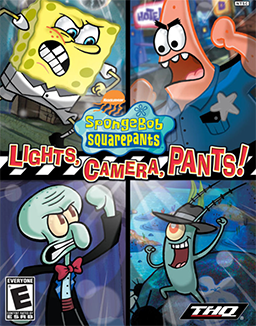 The story is that producer Gil Hammerstein is producing an anniversary special episode of The New Adventures of Mermaidman & Barnacle Boy in Bikini Bottom, and everyone wants to be chosen to play the starring villain role: the Sneaky Hermit. Players can play as SpongeBob, Patrick, Sandy, Squidward, Mr. Krabs, or Plankton to impress the game's talent scouts and win the lead role.

Each location has one scene, and three minigames (referred to as "auditions") required to beat to star in the scene. Each of the minigames are themed off the location they take place in (such as driving in boating school, or serving food at the Krusty Krab restaurant). Minigames come in two forms: those with teams, or free-for-all. These minigames are usually three minutes, though this time can vary.

Notably, after you've finished the campaign in the console version, you can watch the full 30-minute episode of Mermaidman & Barnacle Boy that you finished! In the PC version you can watch it at any time, selecting actors and props as you like, but you have to unlock them through the campaign first (and the movie itself is a lot shorter).

Man Ray and the Dirty Bubble decide to team up with Mermaid Man and Barnacle Boy to defeat the Sneaky Hermit.

Man Ray and the Dirty Bubble decide to team up with Mermaid Man and Barnacle Boy to defeat the Sneaky Hermit.