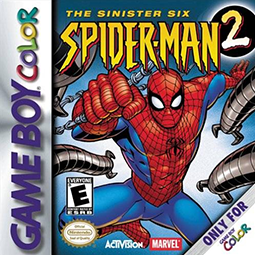 Spider-Man 2: The Sinister Six is one of two sequel video games to Spider-Man (2000). Specifically, it's the sequel to the Game Boy Color version of that game, and was released on May 30th, 2001 by Activision and Torus Games. Like the first Game Boy Color game, it's a side scroller.